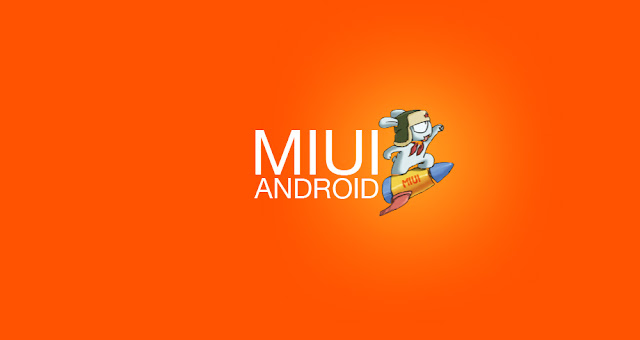 If you live in the area where 4G and 3G Mobile Networks are still not stable, then this tutorial is just for you.

I wrote this post because I have experienced this network problem many times in my village. Most of the villages and small towns of India still doesn’t have stable 3G/4G or both mobile networks.

If you have faced the same problem, then you might have noticed that if you select “Prefer 4G/LTE” or “Prefer 3G” on your Mobile Phone’s Network Types. It always drops down to “2G only” or 3G in certain situations.

But you can still use 4G or 3G networks on your phone by setting the network types to “4G only” or “3G only”. And guess what?…

“ Your phone doesn’t have the LTE only (4G only) or 3G only options in the network type settings .”

Well if you are using MIUI Android Phones then you still have the solution. But it’s hidden, and I’ll open it up for you. You can also call it as MIUI Tricks or MIUI Hidden Features or whatever…

Do you know? How the new MIUI is going to be? You can read it here in this post.

You have probably seen that many of the phones including which are using MIUI, gives only 3 Network Types to choose from in their settings i.e., Prefer 4G. Prefer 3G and 2G only.
But if you have a 4G enabled device (also known as LTE) or 3G enabled phones then you can still choose more than 3 Network Types on your phone .

So, let me show you, how you can do that using this Hidden MIUI Feature or MIUI Trick…

First of all, your phone must support 4G/LTE Network(to use LTE only) or 3G Network (to use 3G only). You can’t do it on a 2G phone.
So, if you are using 2G phone then this trick is not for you.

(If you want to watch the tutorial as a video, then you can watch it at the bottom of this post. I’ve used MI Redmi 2 Prime to make the video and the screenshots bleow.) 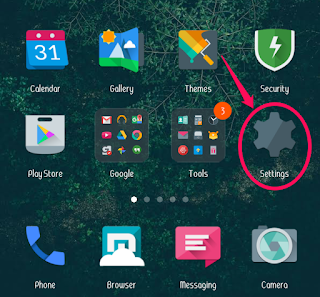 Step 2:
Scroll down to the bottom of the settings screen or options. You will see an option there named “About Phone”. Click on that… 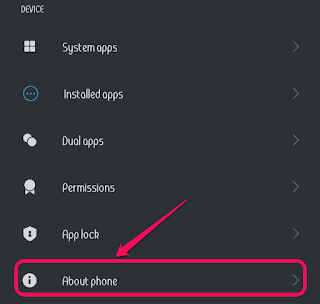 Step 3:
Now you will see, there is an option labelled “ Internal Memory” and on its right side, the information of the Internal Storage has been given.

(You can check the screenshots below for every instructions/steps if you get confused or need more help. You can also click on them to enlarge their size.)

Now click on the “Internal Memory” or its information area continuously for 4 times, and you will land up on screen called “Testing” … 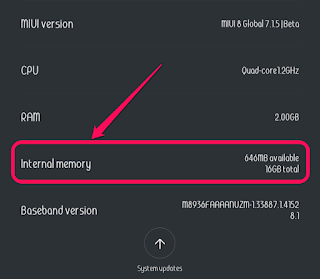 Otherwise if you are using phones which supports 4G/LTE or 3G on both SIM slots like MI Redmi 2 Prime, Redmi Note 3 etc. then you can choose any of the Phone Information or SIM.

The New Redmi Note 4 is already launched in India which also supports 4G LTE on both SIM slots, Check out what’s the BIG thing about it. 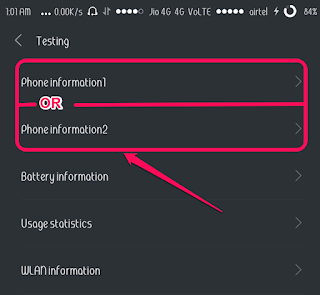 Step 5:
Now you will land up on the Phone info1 or Phone Info2 screen as per your selection on the step 4.

Here in this screen you should see a line as “ Set preferred network type:” and just below that you will see a drop-down option with your default network type selected. (In my case it’s LTE/GSM auto (PRL) because I had selected prefer LTE on the network type settings.)

In case you have selected your network type on the network type settings of your phone as Prefer LTE then you’ll see LTE/GSM auto (PRL) option. Similarly, for Prefer 3G you will see WCDMA Preferred and for 2G only, you will see GSM only.

Now just click on that. (See the screenshot below if you are getting confused where to click.) 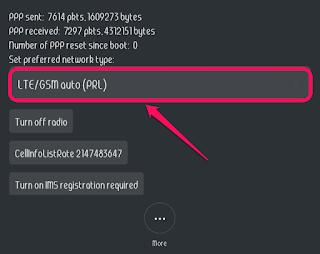 Step 6:
Now you will see a lot of options to choose between so many network types. In my case I got the following List of Network Types:

(The list of above 23 network types appears on my Redmi 2 Prime; it may vary from phone to phone or based on locations.)

You can select any of them (from the above list) as per your need. Usually in India, the most used Network Technologies are LTE, WCDMA, GSM and CDMA.

As I have mentioned in the list above LTE is 4G,WCDMA is 3G and both GSM and CDMA are 2G but with different technologies.

The video tutorial is given below as promised. You can also watch it on our official YouTube Channel.

I am pretty sure if you are facing such network problems then it will help you definitely. However, if you have any questions, problems or suggestions; please post it in the comment box below and don’t forget to like, comment and share it if you want.
Thank you for reading this post, Have a good day!

[Video Tutorial from YouTube] How to use more than 3 Network Types on your phone?

Hi, I'm Bishnu Mahali from Siliguri, India. I am someone who loves tech and I keep myself up to date about them and also like to share my knowledge and experience with others. Feel free to join me on my social accounts.